Over the past few months, I have been doing extensive research surrounding Celtic mythology, specifically from Ireland. I feel that by connecting with our legends and myths and understanding them properly, we can understand ourselves and our culture more accurately and interact with the land in a more understanding and compassionate way, without sounding like too much of a hippy!

From the well known story of Oisín son of Fionn riding off to Tír na nÓg with Niamh Chinn Óir, to the ancient tales of the love affair between Donn (the god of darkness and the underworld) and Danu (the mother goddess and of the land) that was so strong they could never break apart, and is so old that the original existence of the story as a Celtic myth that was widely worshipped is unknown, we see tales of partners being separated, of children being born after their mothers have drunk something small in their drinks, a small manifestation of a god; we see couple after couple go through similar but different trials, like Midir and Étain, who are stripped away from each other by Midir’s evil wife Fuanach when she turns Étain into a butterfly, but not once have we seen any trace of sexuality outside the heteronormative scope.

You’re probably thinking to yourself, but that was so long ago. Is it possible that we have regressed as a society to the point where we accept queer people less than our forefathers over 3000 years ago might have? My answer is that yes, we have.

One of the most famous gods and one of the Olympians, Apollo, the great god of the sun, healing, medicine, poetry, archery etc. etc. (the list really goes on), was deeply in love with the young man, Hyacinthus, a mortal. The tragedy goes that Hyacinthus’ head is cut clean off by a discus ( a sort of frisbee but more solid and made of clay or bronze) and Apollo, in his grief, creates the hyacinth flower from his blood. To put this into perspective, many ancient statues of Apollo and other gods depicted them as naked. The idea was that their bodies were far too perfect to be sullied by mortal things like clothes and that perfect bodies shouldn’t be hidden. If the people of Greece looked up to their gods in such a light, the tragedy of Hyacinthus wasn’t placed there as a warning against homosexuality. In fact, it would have been created to normalise homosexuality within the Ancient Greek society. 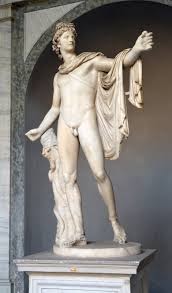 An Ancient Greek statue of Apollo

Interestingly enough, this seems to be limited to men only. This lack of recognition of women’s personalities is mirrored in some of the pillars of the way we perceive Ancient Greece. Socrates, the philosopher who spoke and lived in Athens, was well known for his comments on society and being an atheist in a place and time when religion was central to life. He wrote that women were almost sub-human and this opinion was mirrored throughout Athenian society, as women were not allowed to vote and after marriage were essentially not allowed outside.

What about the Celts, you’re probably thinking. Maybe the Celtic culture fostered homophobia. Maybe they didn’t believe homosexuality existed. I disagree. It is most likely that with the coming of Christianity, the philosophy of homophobia was accentuated and actively encouraged, which would have led to the removal of homosexuality from subsequent retellings of the myths.

The Celts aren’t like what you think of when you think back to the Romans. They didn’t have one leader, they didn’t have one culture, or one set of gods, or rules, or language. Everything was different for each ethnic group and tribe. We don’t know a huge amount about Irish Celts. As we all know, the Romans never made it here, calling our country Hibernia, or the land of eternal winter. But we can safely say that Irish Celts were very similar to the British Celts or Britons next door, who were conquered by Emperor Claudius.

According to some sources, Ancient Greek and Roman commentators who travelled to Britain and other Celtic settlements reported of people being openly homosexual. As well as that, in Cassell’s “Encyclopaedia of Queer Myth, Symbol and Spirit”, Randy P Conner and  David Hatfield suggest that the two great heroes Ferdiad and Cúchulainn were romantically involved. You might recognise these two heroes from the saga of the Táin, or the Cattle Raid of Cooley. Ferdiad was a warrior of Queen Medb of Connacht and Cúchulainn a champion of King Conchobar macNessa of Ulster. They had trained together in their youth, and were blood-brothers. Every day, they fought each other, each one as skilled as the other and every night they sat around the fire and ate together. Cúchulainn felt immense grief once he killed his best friend and foster brother, and one theory is that this was actually evidence for the two being in some form of relationship, however these myths are rewritten constantly and it is very hard to know what the original intentions for these battling friends was. 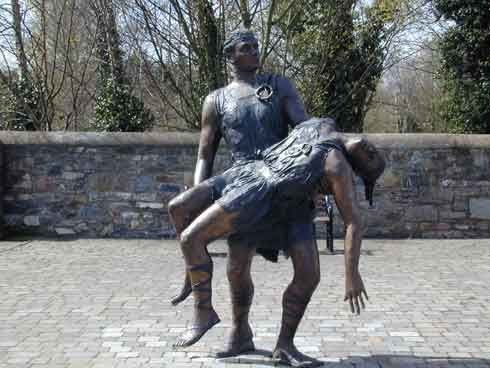 A statue of Cúchulainn carrying Ferdiad in Ardee, Co.Louth, which is named after Ferdiad

In conclusion, I believe a long and toxic intertwinement with homophobic agendas and motives from the Christian church damaged Ireland’s rich mythological history. It is extremely likely that the church helped to spread the homophobia that still resides in Ireland thousands of years later, as well as helping to expunge any form of homosexuality, transgender or any other aspect of the LGBT+ community from our myths. 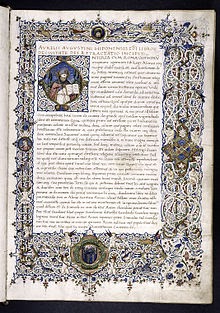 The Lebor Gabala Erenn manuscript was probably the most famous of all the ancient Christian texts. It directly translates as the Book of Irish Invasions and chronicles the myths of the first five races to reach Ireland before the Milesians, or the Celts, as we know them. Interestingly enough, the first race to land on Ireland is said to be led by Caesir, the grand-daughter of Noah of the Ark, but this is likely another revision that was made when scribing the texts to justify the Celtic people’s beliefs without the Christian God.

It is important that through reading our myths, we recognise that these are old stories that have been rewritten hundreds of times. Because of this, I have hope that one day, just maybe, we might be able to uncover the stolen and hidden stories of members of every single minority group across Ireland and the world, and share them to normalise the vast spectrum of sexuality.